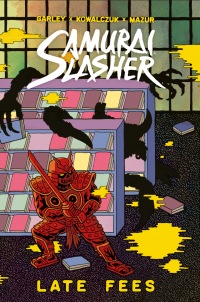 My name is Mike Garley - I've worked on Adventure Time, and Wallace and Gromit, as well as independent projects such as The Kill Screen, Eponymous, and Dead Roots.

I was wondering if you'd be interested in reviewing my new comic Samurai Slasher: Late Fees?

Late Fees is a 36-page limited edition comic (666 signed copies) with a spot gloss cover, which is written by me (Mike Garley), illustrated by the incredible Lukasz Kowalczuk, and with colour and lettering by Lukasz Mazur.

The comic is going to be launched at a signing at Orbital Comics in London on the 8th of September.

If you've read any Samurai Slasher then you'll know that Samurai Slasher is an 80s horror inspired Slasher comic, which doesn't take itself too seriously. However, this isn't anything like that at all...

Late Fees is a slice of life exploration of escapism. It's a story about life, death, and 80s horror.

It's a really personal story for me, as well as the incredibly talented Lukasz Kowalczuk. Which is why I've struggled to describe it... The early reviews have described it as:

"A unique exploration of the nature of escapism set against the bloody backdrop of 80s horror."
- David Molofsky (A place to hang your cape)

"The Samurai Slasher returns to tear your heart right outta your chest. Garley & Kowalczuk successfully add a whole new dimension to one of the most exciting and impressive franchises on the small press scene."
- Ricardo Mo (Propeller, Colossi, Deuce of Hearts)

"Expertly blends horror and nostalgia to tell a powerful story that will stay with you..."
- James Ferguson (Horror talk)

Like I said anything (reviews/interviews/etc...) would be really appreciated. Just let us know and we'll provide some artwork for you (to avoid spoilers AND to prevent repetition). Let us know what you're planning and we'll help out as much as we can.